A curious bout of trade union-advised "sickness" has broken out in the Parks Department of Jan Britton's dismal "Sadwell" Council as yet another scandal breaks under his alleged "leadership".

Regular readers will know that this blog raised an enquiry why a Tipton resident, Tom Arnold, was offering SMBC-owned buildings for sale via his facebook page: 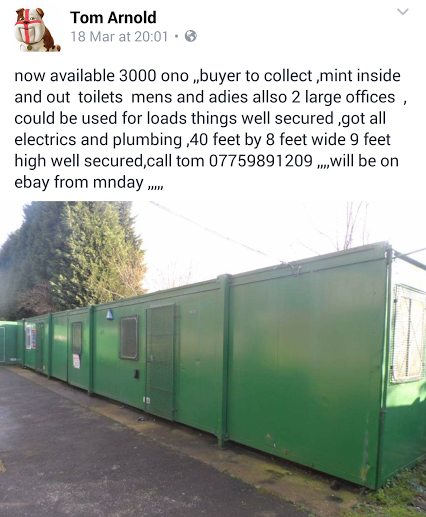 Then allegations were received that persons unknown connected with the Parks Department and the Council had also been involved in selling off what was said to be scrap metal (including, allegedly, even such things as old rugby posts etc). More evidence appeared relating to the sale of four shipping containers owned by us taxpayers:

A poor quality picture shows an obese male by one of them:

West Midlands Police were informed but, as we know, corrupt elements therein turn a Nelsonian blind eye to matters connected to "Sadwell" Labour: 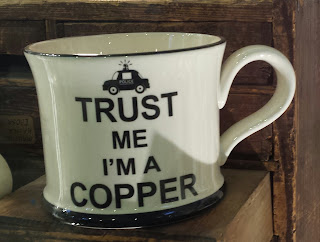 However, I am delighted to say that some sort of investigation is now under way (although this might be Council only) involving a number of individuals and more allegations are following thick and fast including that person or persons unknown have used taxpayers' money to vastly over-order supplies, including plants, for Parks and privately flogged off the surplus to line their pockets for a significant period of time.

We are now finding out that Labour's Hussain and/or his cronies employed low quality staff at high pay who would be likely to do their bidding without too many awkward questions. Thus Neeraj Sharma was employed despite being slated in a report about her pathetic "performance" at Walsall Council and Jan Britton was promoted to the top job of a significantly-sized authority despite having a very thin CV and no obvious talent: 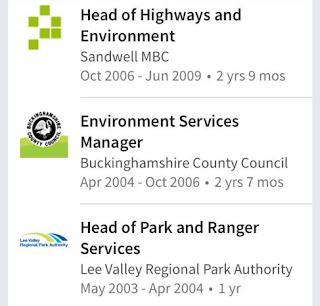 Sharma is now toast following the Wragge Report but, in true Sadwell fashion, she is going with a large pay-off of our money to buy her silence. This has got to stop!

Britton has presided over widespread cock-up and corruption but new Leader, Steve Eling, has yet to sack him (only a matter of time.....).

Another factor at play here is the whole way this deeply dysfunctional Council has been run under Cooper and the pusillanimous Britton. In so far as thick scum Cooper had a "doctrine" it was that each of the six towns of Sadders should be treated more or less the same. To that end he let local councillors run the show in their areas - Hussain in Oldbury, the Jones's & associates in Wednesbury etc.  His crazed policy was that each town should have the same benefits whether economically viable or not - hence, for example the colossal expenditure on brand new sports centres despite cuts elsewhere.

The women-bullying thug also bragged (surely not? Ed) that each town had a "green flag park" and to that end he and his Labour comrades ordered the massacre of geese in those parks because Dickhead Daz didn't like them sh*tting about the place. All this has been brilliantly exposed by Ian Carroll who continues to battle to save the geese from further socialist slaughter.

The stories about the Parks Department being run as a personal fiefdom have circulated for years. But individuals therein were personally close to Cooper and so it was no business of Britton to poke his nose in. He has f"cked-up in so many areas but, as you will see above, he claims to have had Parks experience in his low-grade career! But as ever, this lily-livered creep couldn't see what was going on there (and that is the most charitable view) or did as Daz told him and simply abdicated all responsibility despite his substantial pay from the public purse to do a job of work!

Of course, Parks themselves then let the fireworks accident unfold at Brunswick Park and now evidence of widespread fraud is emerging.

I am making no allegation about any individual but after time off for "stress" since my initial allegations Mr John Satchwell Senior has left SMBC.! We need to know from Britton why and whether he too has had a pay-off although it is clear that Britton must - if not sacked soon anyway - be kept away from any further investigations which must be independent. I am also sending this to WMP since they need to be in on this if not so, already..... We need to establish whether Satchwell is involved or not and, if not, whether he is carrying the can for more senior staff (cf Dave Willetts re Wragge Report).

(John Satchwell WAS known to be very close to another senior Labour Councillor.....) 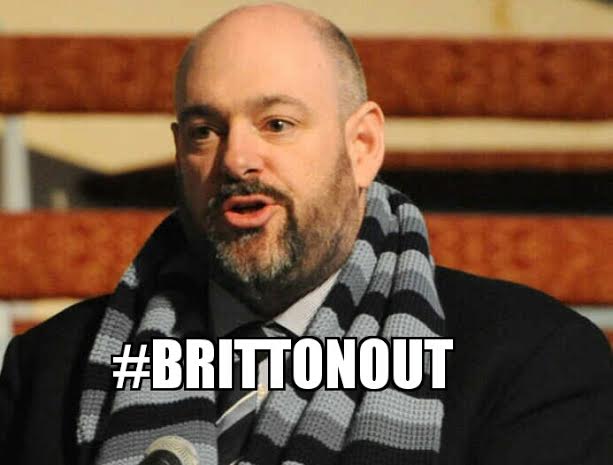 STOP PRESS - can any of my Smethwick friends tell me what is going on with Rouf's (!) Midnight Pharmacy in Shireland Road?

AS TROLLED BY DARREN COOPER DECEASED AND ANDREW HIPKISS.
Posted by The Wanderer at 12:57